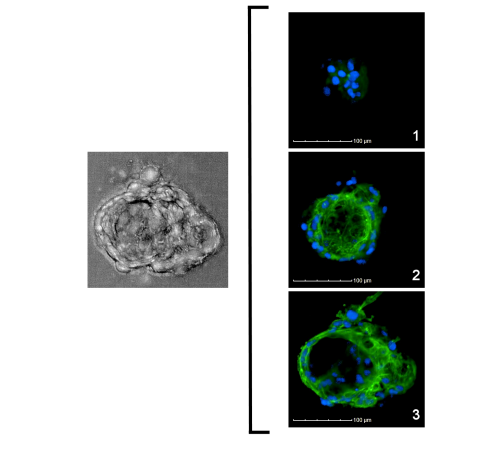 LifeNet Health LifeSciences is currently co-developing a 3D thyroid microtissue model with the United States Environmental Protection Agency (US EPA). This model utilizes primary human thyrocytes that have been isolated and cryopreserved, then seeded onto Matrigel-coated 96-well plates. Known thyrocyte-related cellular markers, such as cytokeratin 7 (CK7) and thyroglobulin (TG) were expressed and the cells consistently form 3D microtissues.

Our cryopreserved primary human thyrocytes (at passage 1) show over 80% post-thaw viability and over 90% retention of thyroid specific markers. When used to produce 3D microtissues, the thyrocytes consistently produced both TG and T4 in culture as well as exhibiting follicular structures.

The Thyroid Gland: Its Function and Cellular Composition

The thyroid gland takes iodine from food and converts it into 80% thyroxine (T4) and 20% triiodothyronine (T3). The main hormonal feedback loop involves the hypothalamus-pituitary-thyroid (HPT) axis. The hypothalamus secretes the thyrotropin-releasing hormone (TRH) which controls the pituitary to release the thyroid-stimulating hormone (TSH). TSH is the signal for the thyroid to start T4 and T3 production. T4 is a prohormone while T3 is the active hormone. The thyroid makes 20% of T3 while the other 80% is made by the liver and kidneys metabolizing T4.

T3 and T4 from the thyroid are essential for maintaining normal organ growth, development, and function. When there is dysfunction in the thyroid, other organs are affected, including the liver. Thyroid abnormalities (such as hyperthyroidism and hypothyroidism) can play a part in cirrhosis, hepatitis, cholestasis, and liver failure. 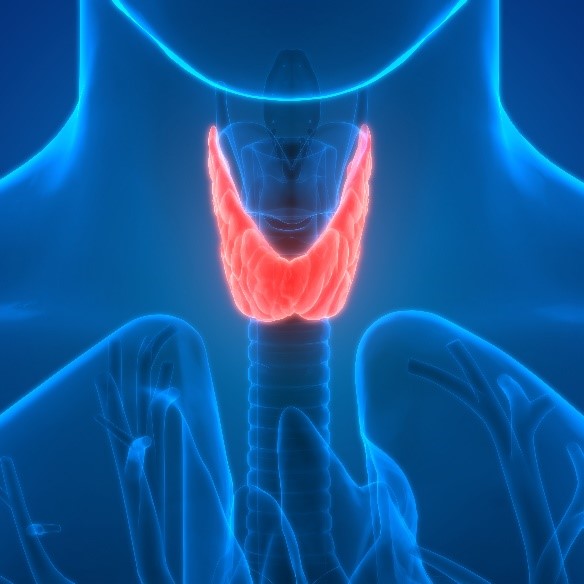 Endocrine disrupting (ED) chemicals are, by definition, chemicals which interfere with hormones, specifically the endocrine system. Some very well-known ED chemicals are:

Safety assessment assays have been developed since the 1990’s to screen for ED chemicals. However, most of the regulated assays are performed with animal species.  The assays that use human cells may not be as physiologically relevant to the in vivo cells and tissues. One assay uses human microsomes (subcellular fractions of liver) and two use immortalized human cell lines, which have been artificially manipulated to never have a finite lifespan.

The thyroid is especially the focus of these assays. One reason is that it is an organ responsible for normal growth and development. Another is that it is involved in two main hormone feedback loops: a) the hypothalamus-pituitary-thyroid (HPT) axis (described above) and b) a less known axis involving the thyroid and the liver.

With regards to the latter axis, the liver plays a major role in thyroid hormone transport and metabolism. T3 binds to hepatocyte nuclear receptors which sets off its conversion to T4 by iodothyronine deiodinase type 2 (D2). These reactions lead to the liver’s central role in activating and deactivating the thyroid hormones.

Previous attempts to culture thyrocytes using 2D monolayer cell cultures have shown decreases in thyroid hormone levels1. Therefore, having a three-dimensional system of thyrocytes which mimic the follicular structure of the in vivo human gland is essential.

In the era of 3D models, the 3D human thyroid microtissues are set to play a major role in environmental screening as well as drug discovery and development. Primary human thyrocytes are isolated and cultured in plates coated with an extracellular matrix. Within 24 hours, the thyrocytes self-assemble into small microtissues which exhibit follicular structures similar to the native gland. This 3D model has been used to screen out compounds with endocrine disrupting activity.

This content was authored, reviewed, and approved by Ph.D. scientists. March 13, 2021.